Our week long tour of the south of Spain begins TODAY. Super pumped for all the food and drinks and sun to be had. This post is going to be disorganized in timing; the goal is to simply take account of the places we visited.  Okay. So here it is:

First of, our (cheap) flight had a long layover in Lisbon. No complaints- this is my favorite city in Europe and I’ll gladly take a wine with a view right in Belem…We had a few more in Alfama with some traditional Bacalao (fish) for lunch. I adore this city.

We had the same Uber driver (Bruno) throughout the day which was an extra welcoming touch. Bruno recommended we see Sintra next time, which is located right outside of the city. 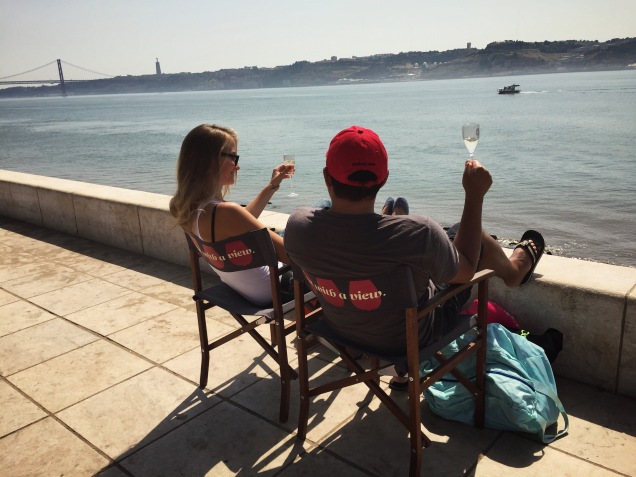 We got to Malaga at midnight. On the airport we rented a car from Interrent (subsid of Europcar). The only bad thing about having a car in Europe is paying loads of money for parking.

I got the hotel with my Marriott points (20k per night) and the place was fancy (AC Hotel Malaga Palacio). It had a rooftop bar where we got a couple drinks. Jet lagged, we went to bed at 3am, but I didn’t fall asleep until 4:30ish. I started reading James Altucher’s book ‘Choose Yourself’.

Vacation style, we slept until 11. Then, walked the streets of historic Malaga, which was located right behind our hotel. Clean, beautiful, with small balconies everywhere. For breakfast, we had my favorite tostas con tomate y jamon plus beer. NOM, it’s been way too long.

Then we headed for Granada, located about 2 hours away. We stopped in La Herradura for lunch (pulpo and eggplant) and a dip in the ocean. The beach was rocky and not very nice, but this place was perfect for snorkeling- interesting rock formations all around the bay. It’s a cove, so there are no waves- just quiet, clear, turquoise bliss. We also almost rented a hobie catamaran on the beach (cheap, 50 euro for half day rental) but we really didn’t have enough time.

Leaving the beach, I drove or a bit to practice driving a manual car (Cami dealt with all the jerks like a pro).

We finally got to Granada around 7pm. Finding parking was impossible. We ended up parking in the center of the city in San Augustin Parking which cost us a gross 25 euros per day.

For accommodation, Camilo found us a nice small apartment (Apartamentos Venecia) 3 minutes from Alhambra. We had a balcony with a stunning view of the city. The place wasn’t fancy, but it was everything we needed- small fridge, kitchenette, bathroom, bed and balcony.

For dinner, I had salad with goat cheese, my fav. Cami had cheese and egg over potato fries.

We visited the Alhambra today! So, so magical. We got the ‘General’ day ticket (7euro) which allowed us to visit everything except for the Palaces. We spent good 4 hours wandering the gardens, hills, and mini palaces.There were fountains and little benches all around, where we’d stop frequently and just talk and look out into the horizon for a panoramic view of Granada. The Alhambra is among the most inspirational places I’ve ever been to (we even came up with a list of novel topics! If I ever decide to actually write a novel I have to remind myself of this place). 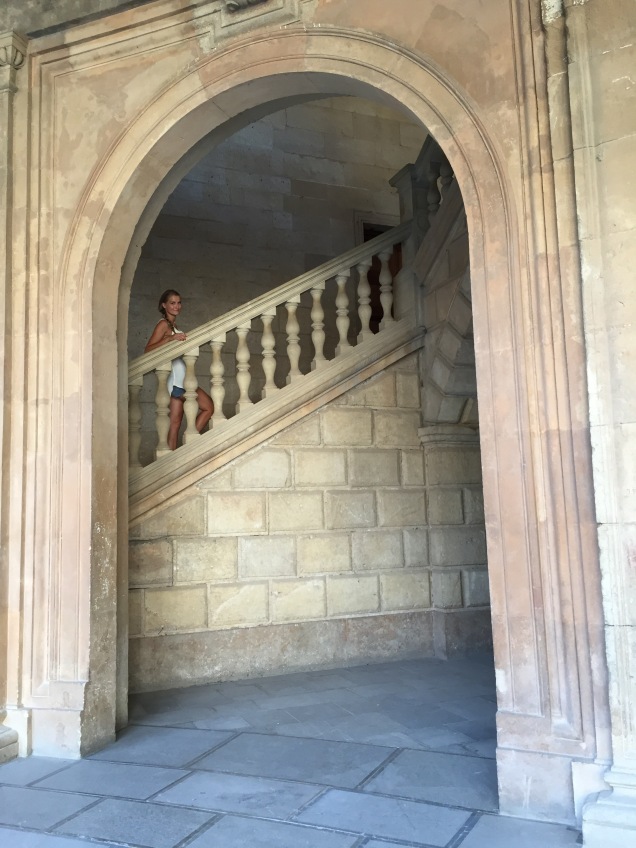 For lunch, we got sangria and a tabla de jamon y queso in the fancy Hotel America where a bird pooped all over me.

No, seriously.  I was pooped on in a 5 star hotel restaurant.

Alas, I’d still recommend the place for a quick refreshment, especially on a day like this, with 100+ degree weather.

For dinner, I whipped out a nice salad for dinner. After that, we went salsadancing at the Boom Boom Room. Oh man, this life… I could get used to it. 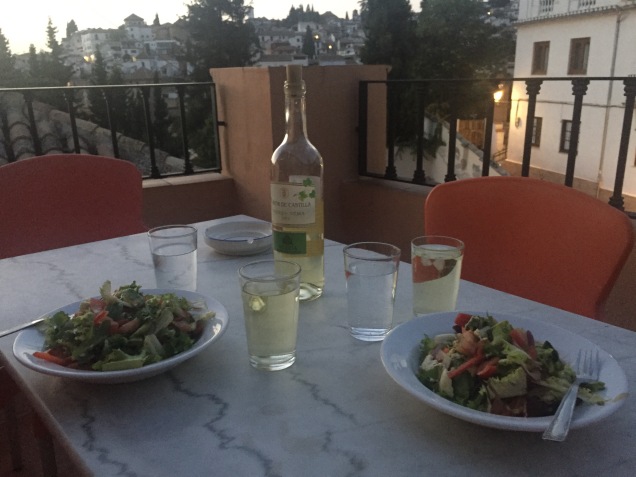 We passed through Marbella today, just to see what the big hype is about. We went to Mistral Beach for a couple of drinks, salmon tartar and a walk along the beach.  Final verdict on Marbella: disappointing. Sure, you can see wealth everywhere, fancy mini restaurants on the beach… But the beach itself sucks. The sand is dark and dirty and the water isn’t very clear. The only thing that was cool was the party ambiance. There are plenty of large clubs right on the beach with their own fancy pools and DJ’s.

We finally got to Gibraltar around 5PM and were ready to see the rock until we found out that Camilo needs a visa. Dammit.

Well, try #2, let’s go to Morocco! Algeciras is the biggest port in Spain and there are ferries every hour going straight to Tanger. It would be a nice day trip … If only Camilo could go there without visa, which he can’t. Poor Colombians.
By the time we decided to at least take a picture of the rock, it was already way too dark for a good picture… But I have to say, the rock looked like a fortress from the beachside.

We had dinner in ‘La Linea’ which is literally the border town between Gibraltar and Spain.  The place we found was called ‘Bodegillo’ and it was fantastic.  The food was cheap, fresh and plenty. Our server had the nicest smile I’ve seen in a while.

I learned that Gibraltar is happy being a territory of the UK (on the contrary, Spanish people would love to get it back).  The island is a tax haven, so many people from La Linea cross to Gibraltar only to fill up their tanks, to buy alcohol and clothes, and to gamble.

Unable to go to Morocco for a day, we decided to head straight for Cadiz.  On our way, we stopped in a typical Andalucian restaurant, right off the highway.  I love those. They are so genuine. I had a ‘menu’- salmorejo (gazpacho with tuna and ham) tortilla espanhola and coffee- all for roughly 8 euros.

Cadiz was literally my love at first sight. We parked right underneath Parque Genoves, located in the northernmost tip of the panhandle. We were lucky to get a last minute Airbnb room in the center of the old city (with Laura… expensive, but close to the beach and food).

At night, we tried to go to a flamenco show at La Cava, but the place was packed.  It seems that in September there’s only one place in Cadiz with flamenco shows and it fills up quickly. So, we decided to go to a fancy restaurant instead.  The place was called ‘El Faro’ and it was the absolute best restaurant we’ve been to in Spain.  The revueltos con bacalao (scrambled eggs with fish) were creamy, delicious and simple, yet so full of flavor. Literally cooked to perfection.  We also had little tostas with shrimp (which were semi gross after I realized the black things weren’t pepper, but shrimp eyes) and salad with figs.

Yet another day of our favorite Spanish routine: roll out of bed into a restaurant for beer and food.  Walk a little more for another beer.  Then, find a place to have a nap.

We went to several terrazas by the port neighborhood (La Vinha) but I hated the food there, so we ended up mostly consuming beer (and more beer).  We walked one more block to the city beach (La Caleta) where I took the most delicious nap.  We also took a refreshing dip in the ocean.  What a life, huh?

At night, I left Camilo and went to Sevilla to visit Christina. Right before I boarded the bus, I heard some amazing news from my much awaited job prospect.  They want my references! AH! Beyond thrilled.  I was able to confirm my references within the hour it took me to get to Sevilla.

Once in Sevilla, we commenced the girl’s night out right away. We went for tapas (I had piripi montadito- pepper, chicken and alioli, simply delish). After a couple bottles of wine, we ended up at Chile Bar.  There- some drama, lots of deep drunk conversations (with photos) and some confessions.  Much needed friend therapy session 🙂

We got home around 5AM (even though the clubs were still pumping) and we stayed up until ~6AM talking with Christina’s boyfriend and his friend. 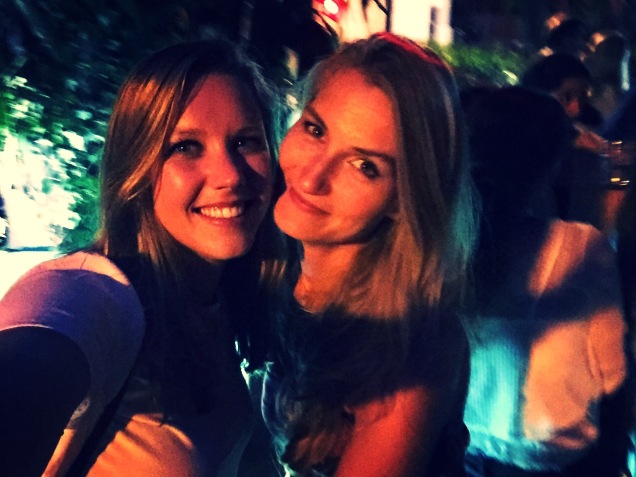 I think the last time I went out partying until 6AM and woke up at 1PM the next day  was in Spain.  Well, what wouldn’t I do for cultural reasons…. 😉

We went to Casa la Viuda for food. Oh my lord. The food was incredibly delicious, simple and easy to do.  Just magical- eggs with potato and ham.  Then ‘canha de lomo’. Then some eggplant covered in sweet honey sauce.  I can’t. Literally salivating at the thought of it all. 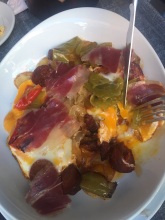 We then headed to the center to see the cathedral.  We had a few drinks at the rooftop of Donha Maria (lux hotel in Sevilla).  We walked around the center and learned all kinds of interesting historical facts from Christina and Paco, i.e.

Sunday was our last full day in Spain (flight leaves in the morning from Malaga).   We decided to go to Ronda (half way between Sevilla and Malaga).  We actually really lucked out because there was an annual feria going on in Ronda that weekend.  The city was decorated in vibrant colors, the women were dressed up in their flowery dresses, and the streets were  filled with families.

Many believe that bullfighting originated in Ronda, so the fights are very popular there, especially during the feria.  We were lucky to get some seats to see the actual fight with some famous toreros (one was a woman!). I hated the whole thing.

I read Brian Elm’s book ‘Peak Performance’ on all the flights (actually it’s more like a long New Yorker article, because the things was so short). I didn’t love the book.  It barely scratched the surface of Lean, and mentioned all of the things I already know and apply in my work.   Here are some memorable quotes:

I also started listening to  ‘Scrum’ by Jeff Sutherland.  It’s the same principles as Peak Performance, but this book actually goes into detail and explains real examples of change.