TMJ: I was jerked out of bed this morning reading the news about Brexit. I simply cannot believe the world has moved this close to insanity.

Aside from the political and financial meltdown that is unfolding, I am deeply saddened by our world of growing walls. Watching the xenophobic right wing factions in Europe and the United States come out on top scares the living shit out of me.

The UK exit means a lot of uncertainty for the EU, US and the world. But the immediate danger to our country is that somehow this move actually gives credibility to the Trumpster. For the first time, I’m seriously terrified that he may actually win in November. If the UK can shoot itself in the foot, who is to say we won’t do the same?

WILT: Tesla has produced models S and X. It turns out that Elon had in plans models E and Y too, spelling…SEXY. Unfortunately, Ford stole the Model E before they were able to patent the name.

I love learning. Every single day, I am on a cutthroat hunt for new opportunities to learn.   I read a ton of articles; I consciously seek out stimulating conversations and I religiously feed my podcast addiction. I’m always taking a Coursera class, and I’m always reading a book.

I’ve done really well with consuming knowledge, but I’m doing poorly with actually absorbing it and making it stick.

With this new series of #weeklylearning posts, I’m going back to the very reason why I started this blog- to hold myself accountable to my goals. I want to ensure that I can retain and recall the knowledge I acquire.  I also want to record some of the intellectual conversations I am having with (myself) people.

This time around, I’m going to use a very convenient (lazy?) method to capture my learning.  I created a Trello board ‘My learning’ with three broad categories of information:

Every week, I’ll record most of my learning in very brief notes on the board.  The idea is just to be able to recall the information (this should only take a few seconds per fact). At the end of the week, I will review the list to solidify the information in my brain, take a screenshot and post three coolest facts to the blog. 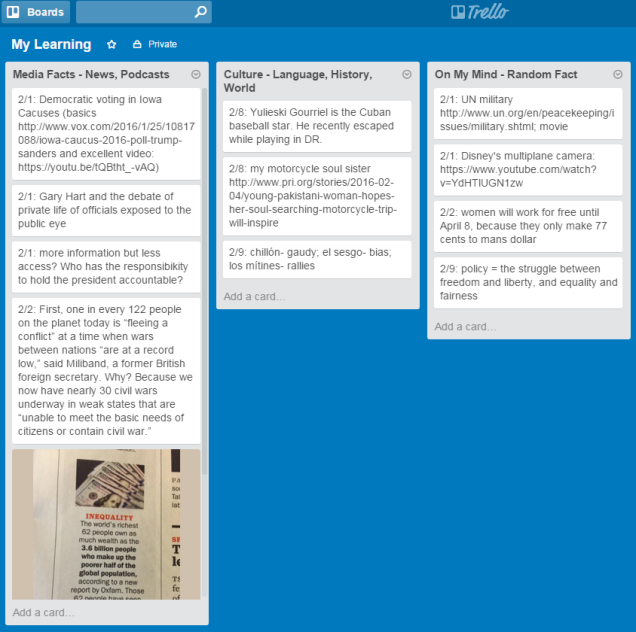 Earlier this week, Bloomberg has published a non-partisan, comprehensive report on the economic risks of the climate change. The study assesses and quantifies potential consequences of the climate change for each region in the United States. In particular, the report focuses on the damage to coastal property from rising sea levels, climate change effects in agriculture and energy demand, and impact of average temperature rise on labor productivity and public health.

The report states that within the next 15 years, the annual cost of coastal storms and hurricanes along the Eastern part of the country and the Golf of Mexico will increase by $2-3.5 billion (+ $7 billion on losses associated with potential hurricane activity). The report predicts that if we continue with our current approach to climate change, by 2050 up to $106 billion worth of coastal property will be below sea level (with the highest losses  on the Atlantic coast).

Greenhouse gas-driven changes will rise the temperatures which will require production of additional 95 gigawatts of new power in the next 2 to 25 years, costing U.S. residents up to $12 billion per year.  This temperature spike will also reduce productivity of outdoor workers. Additionally, agricultural yield will likely decline by up to 50-70% in some states in the Southeast due to extreme heat (though some losses might be recovered by increases in agricultural productivity of traditionally cold states).

Although The Risky Business Analysis focuses mostly on assessing climate change related risks, it also offers some broad solutions to this dark economic reality.  The report urges businesses and investors to include the risks of climate change in their financial analysis.  Lastly, it encourages strong public sector response to this crisis– the most instrumental tool in prevention of future climate-driven disasters.

The Syrian Civil War has removed more than 2.5 million people from their country to immediate neighbors of Turkey, Lebanon, Jordan and Iraq (UNHCR, image below lists approximate numbers of refugees in each country).  Women and children make up 2/3 of the refugees (this is a conservative estimate; up to 75% quoted by some sources).

Rape and sexual slavery among these vulnerable groups are a disturbing systemic reality. Women escape Syria where rape is used as a military strategy, only to experience the same risks in the refugee camps abroad.  To make the problem worse, survivors rarely report the crimes fearing rejection or even death from the hands of their own family members (honor killings).

Special Envoy for the UN High Commissioner for Refugees, Angelina Jolie has called a Global Summit to End Sexual Violence in Conflict. The summit has brought together influential policymakers, NGOs and survivors.  The result of the meeting was an International Protocol outlining standards for investigation of sexual violence in conflict areas. While the recognition of this problem is a significant step forward, it is not enough.  To have a meaningful impact, the international community has to issue a coordinated action plan for combating this weapon of silent destruction.

The hijab – veil covering head and neck- is regarded as the most distinctive feature of Muslim women.  The term is mandated by the Islamic dress code.  Interestingly enough, the veil is not mentioned anywhere in the Quran, except for the wives of Muhammad.  At the time, they were the most important women in the society and the veil served as a protection from the eyes of lower class men.  Today, eastern women sometimes regard the veil as a symbol of connection with Mohammed’s wives and a sign of obedience to God.   In western eyes, the hijab is a symbol of seclusion and oppression.

I actually looked this up: the Qur’an does not explicitly address the hijab, but rather it states that women should cover themselves, in general terms:

In my ignorant eyes, hijab was adopted as the interpretation of Qur’an evolved. I neither condemn nor praise the moral values behind the custom, but I do believe that women should be given a choice. And, it seems that a new London-based social media movement ‘Stealthy Freedoms of Iranian Women’ is re-defining the law by encouraging women to take off the hijab in public places.  The idea is simple: If you want to, take off the hijab and post a picture on Facebook.  So far, the site shows 500+ pictures of women with banana smiles on their faces in the most unexpected areas (I even saw one driving a car!).

Perhaps the most compelling quote that I have found about the movement: “It is painful that I shall not be free so that you will not sin,” writes one woman. “That I have to be covered so that your weak faith does not break!”

Immigration has been cornerstone of policy debate for decades.  The debate has focused on many different aspects of the reform, but the U.S. economy and border protection have always been at the epicenter of the discussion.  As expected, policy approach for the immigration reform is divided across party lines. Democrats emphasize economic benefits of a larger labor market and the right for a path to citizenship for immigrants residing in the country while republicans focus on border security and amnesty threats.

The argument put forth by the Democratic Party is a moral one, based on the United States immigration heritage.  President Obama and his party emphasize the need for a road to citizenship for undocumented residents who currently live in the shadows of our society.  The President argues that these residents have contributed to the U.S. economy and have placed roots and families in this country, yet the United States has not rewarded their hard work and dedication.  On the contrary, the current immigration system has left 11 million undocumented residents living in fear of our institutions. The President especially focuses on the children of undocumented parents (‘The Dreamers’) who were brought to this country through no fault of their own. To be clear, this liberal view does not neglect the need for undocumented individuals to admit they have broken the law; on the contrary, it assumes immigrants will be required to pay adequate penalty in fees and taxes for their illegal stay in the United States.

Republicans, on the other hand, are fearful of setting a precedence for lax immigration reform, which, they argue, will encourage illegal immigration in the future and put in question the security of our borders.  The republican view also brings to question the effect on the economy of the 11 million illegal residents who would become citizens (and therefore would be entitled to all government and social services) as a result of Obama’s reform.  Consequently, policy aspects discussed by republicans focus mostly on work permits for illegal immigrants, rather than options for citizenship.

While most politicians agree that the current immigration system is broken, their idea for the reform is different.  The Democratic Party supports an ‘open door’ immigration reform that offers a pathway to citizenship for illegal immigrants while republicans focus on employment permits, arguing that illegal immigrants have broken the law and should not be awarded a citizenship.  Until common language is agreed on and consensus reached, the battle for immigration will continue, with no productive implications for residents living in the shadows of illegal immigration.

Our generation faces a set of immediate challenges, from nuclear proliferation, through poverty, war and health issues to a rapid change of climate.  But, one of the most silently destructive issues is the future of our energy supply.  Unfortunately, investing in clean energy sources is costly and in the short-term harmful to certain U.S. states that depend on oil production as the primary source of income.  However, in the long-term, clean energy also means a healthier planet for the next generations.  The two sides of the argument have produced a wild and controversial discussion on what is the most optimal solution for the conundrum.

I believe that the solution to the energy-environmental crisis is a simple, two-part recommendation.  It includes: tax on carbon and increased investment in clean energy.   Firstly, the United States has to lead as an example in moving away from the ‘Cap and Trade System’ of energy in which the right to pollute is given to the industries (while remaining under government imposed limits).  This form of direct regulation is ineffective, because although pollution vouchers are free, the companies often buy additional vouchers from other industries and transfer the burden of payment to consumers.  A more effective policy would be to levy a direct tax on carbon emissions on both consumers and producers.  The revenue raised by the tax would then be invested in clean energy research and subsidies for public transport. Clean energy investments would include innovative research to capture renewable sources of energy, increase efficiency and use of biofuels, and transform public transportation into a greener system.

President Obama has made a commitment to reduce carbon emissions from power plants by 30% from 2005 levels.  Modernizing plants and reducing carbon emissions is the first step to securing the future of energy and environment in the United States and in the world.  Introduction of the carbon tax would expand on this policy and reinforce innovation in clean technologies.

Magda Is Learning
Create a free website or blog at WordPress.com.